Cait Oponski, owner and operator of Corral West Horse Adventures in Goodyear, Arizona, runs a trail riding business with her fiancé, Alex Luca. They use the proceeds from CWHA to fund their non-profit, Lucky Break Rescue, and their mission to foster and rehabilitate neglected and abandoned horses.

Team Tecovas sat down with Oponski to learn about her mission and journey. We heard the harrowing and healing stories of Zane, Luna, Gem, and Roman, and how their own journeys and rehabilitation inspire others. CO: We purchased Corral West Horse Adventures as an existing trail ride business five years ago from a couple who was looking to retire. Although CWHA was not a new business per se, we wanted to revolutionize the way things were done: operate as a for-profit trail ride business and then use the profits to rescue at-risk equines. Initially, we leased other horses as we rescued our own, and as we built our herd, but as of three years ago, we are a herd made up entirely of rescues, and last year we officially became a 501(c)(3), Lucky Break Rescue.

TT: Where does your love and connection to horses come from?

CO: I did not grow up in a “horse” family but I have always been drawn to them: their smell, intelligence, gentleness, etc. I started riding when I was 3 or 4 on a leased Appaloosa named Dan and horses were always something sacred for me, having not grown up with them.

Six years ago, I saw a horse who could have been Dan’s twin listed on a kill pen site and I had to rescue him—his defeated face and emaciated body haunted me. Today, Zane is my most trusted kid horse. At the time, I had no idea American horses were exported in large amounts across the Mexican and Canadian borders for human consumption. Thanks to Zane, hundreds of horses have been saved by us and our rescue partners over the past several years.

TT: The work you do involves pain, healing, and joy. Do you have a favorite journey of a specific horse?

CO: I love all of the rescues differently, but the story that brought even our seasoned veterinarian to tears is Luna. Luna and her sister Gem were saved as unhandled (wild) fillies who were just two and three themselves and heavy bred. A horse’s gestation period is 11 months and Luna had been bred as a yearling. Both extremely pregnant, scared, and underfed, we had no idea what to expect because they had had no prenatal care. Both mares arrived at the ranch and Gem delivered her colt the next morning, once she knew she was safe.

A few days later, Luna delivered a stillborn nearly half her size. Because she was so small and her foal so large and stillborn, she suffered a major, life-threatening complication. Even though she was unhandled, she was too weak to stand and my wranglers were able to slide her into our small trailer. Luna was nursed back to health—mentally and physically—to become one of our most affectionate horses. Today, she has been adopted out to her forever home. She is now a successful barrel (winning her first race with a 16.5 sec. time) and breakaway pony. Gem is also in her forever home with a wonderful family who has adopted two other mares from us. TT: What is the first part of the journey for a new rescue?

CO: Once a horse is rescued either from auction, kill pen, or owner surrender, they are quarantined as illness and disease run rampant at the auction houses. After (or during) quarantine, which includes plenty of feed and sometimes careful feeding for thin horses we tend to their feet and teeth. A happy horse has to have a healthy mouth and hooves. We have an extremely knowledgeable wrangler who helps us with rehab and is also a great vet tech when needed. Once the horse is happy and healthy, we assess what they already know from groundwork to riding. Some horses come to us ready for guests while others need to be wrangler horses first or sent to the trainer.

TT: Do you find rescues respond differently to kids vs. adults?

CO: All of our horses are gentle for novices—children or adults, but there is something special about watching them with children. It is almost as if they know when it is a child riding. It’s really hard to explain the magic that happens. A local foster home, Sunshine Angels, comes out to ride each Christmas, and watching the rescues interact with these kids, many of whom were also rescued, is moving.

TT: Has a customer ever asked to adopt a rescue?

CO: We have had customers become donors, adopters, friends, and everything in between. I am grateful for our rescue family and village. TT: What is the hardest part?

CO: The hardest part of rehabbing the rescues is saying goodbye. If a horse has been a good teammate for us that also means it’s easy for us to find a wonderful forever home for them to graduate to. There are always new horses needing a safe place to land so it’s a bittersweet feeling. We are excited for their next adventure, but after pouring money, blood, sweat, and tears into them, it doesn’t get any easier to say goodbye.

TT: How do you find/acquire rescues?

CO:One of our senior rescues, Roman, was saved from Bowie Auctions. When he arrived with his paperwork, we discovered that he was an AQHA (American Quarter Horse Association) registered gelding: the oldest recognized breed of horse in the U.S. His barn name was “Victor.” As a younger horse, he had competed in Vegas at the World Series of Roping and was born in Canada. Typically, we don’t know much about the rescues—much like a shelter dog—it’s often a puzzle or guessing game but knowing some of Roman’s history was a pleasant surprise and a testament to the kinds of wonderful horses who end up in unsavory situations. All horses are one owner away from the slaughterhouse pipeline.

TT: What’s on the horizon for Corral West?

CO: Corral West / Lucky Break is looking forward to another season of rides this fall when horses return from pasture but we would also like to begin shifting our focus to all rescue work and all therapeutic riding over the next few years. Horses—especially the ones who have overcome adversity themselves—are amazing healers. Thanks for visiting with us Cait, that was utterly inspiring. Book your ride at corralwestadventures.com. Donate to 501(c)(3) Lucky Break Rescue through their PayPal: LuckyBreakRanchRescue@gmail.com 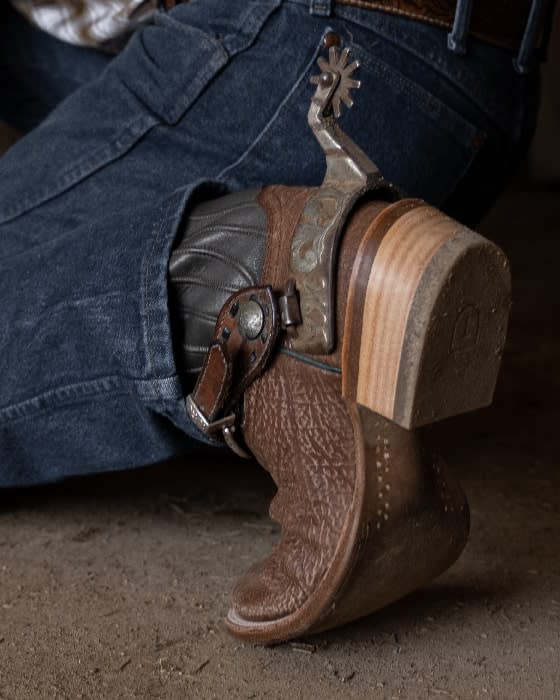 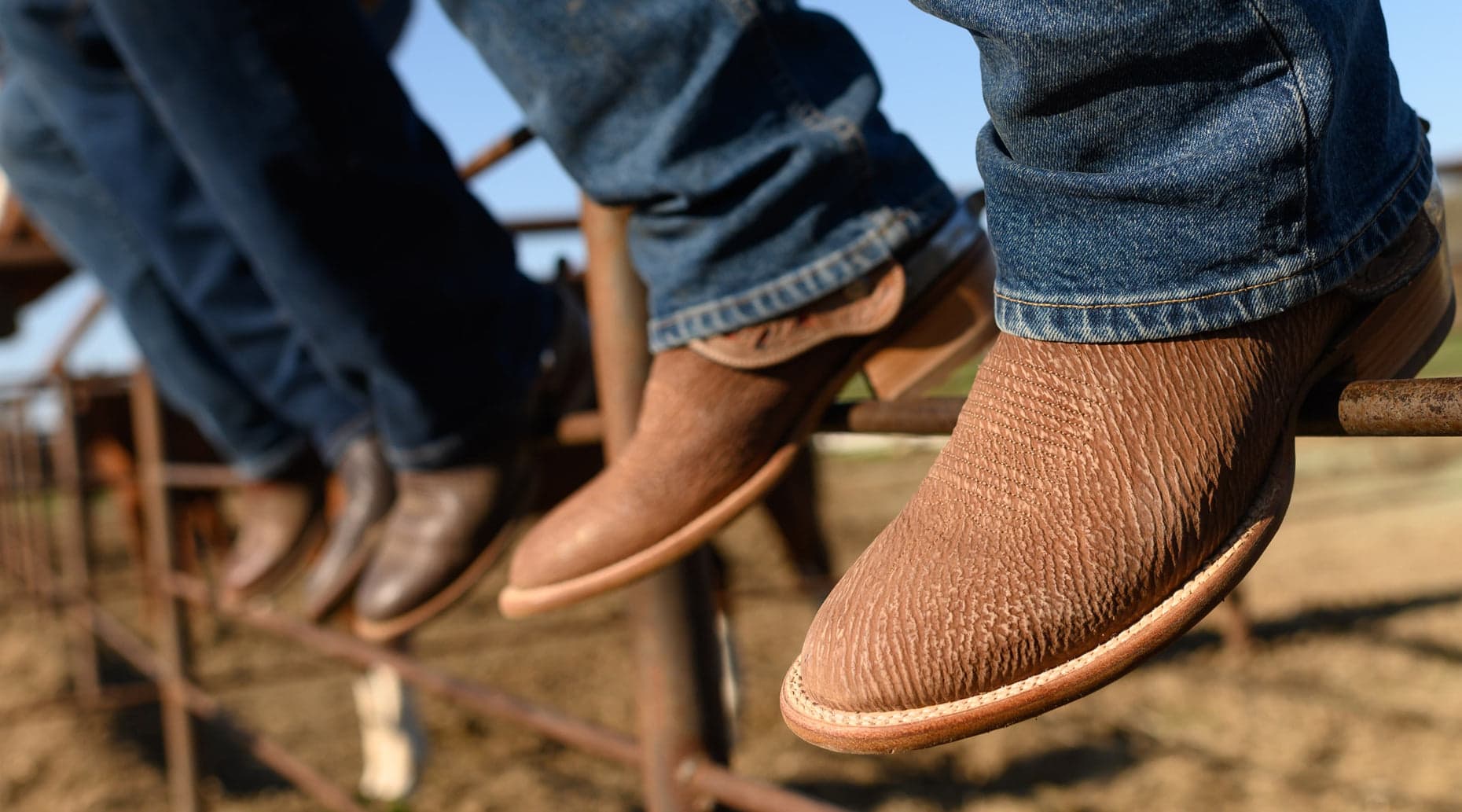 If you're ready to ride, make sure you do it in a pair of The Prescott, our first Horseman boot.