We jumped at the opportunity to shoot Whitney Rose in our new women’s boots in and around a couple of Austin’s most iconic music venues. There may have been some cold beers at the end of the day and a chance to catch up on what she’s been up to during this crazy time. On February 7th, Rolling Stone announced the release of We Still Go to Rodeos, the fifth studio recording from Austin-based singer and songwriter Whitney Rose. There were more than 100 tour dates booked in the months ahead including shows in 12 countries, and sets on headlining stages at festivals in Europe and stateside. Momentum was building for her and for her record and then, well, we all know what happened next.

When We Still Go to Rodeos was released on April 24, 2020, the pandemic had already wreaked havoc on any plans that touring musicians might have had. Whitney’s tour, like so many others, went up in smoke. But the record was a different story. It received critical acclaim from sources like American Songwriter, Rolling Stone, No Depression, Saving Country Music, and Billboard. Paste Magazine named it one of the best albums of 2020. (It was produced by Paul Kolderie, whose resume includes projects by Radiohead, The Pixies, Hole, Uncle Tupelo, and many others.) With no stages to play, no record store events, and no radio interviews to do, Whitney watched, waited, and wondered. Should she play from her couch? Should she move on to writing the next record? She wanted to share something that felt as big and important as the record is to her. That moment has finally arrived. On November 15, a live performance of the full album will air online. She’s done it with a little help from her friends. She assembled an amazing band for the performance including Lisa Pankratz, Brad Fordham, Dave LeRoy Biller, Rich Brotherton, Trevor Nealon, and songwriting stalwart, Bruce Robison. The production of the livestream leans into Bruce’s efforts to establish The Next Waltz (read more about both here) as a model for how to put together a production that is sonically powerful and visually engaging–all in the name of giving musicians a “stage” in these crazy times.

“I really just had to wait until I was proud of the production to introduce these songs to the world in a live setting. Normally, I’d have played close to 100 shows by now all over North America and Europe. I sure do hope I can get back on the road in 2021 — we have a lot planned — but only time will tell if those plans come to fruition. In the meantime, I hope my fans enjoy what we’ve worked hard to present.” -Whitney Rose Tecovas is proud to have outfitted Whitney and the band with boots and put some of our new apparel on the band for the performance. We hope the Tecovas faithful will join us in supporting Whitney Rose by following her on Instagram and tuning in to the We Still Go To Rodeos broadcast beginning November 15th at whitneyrose.veeps.com. 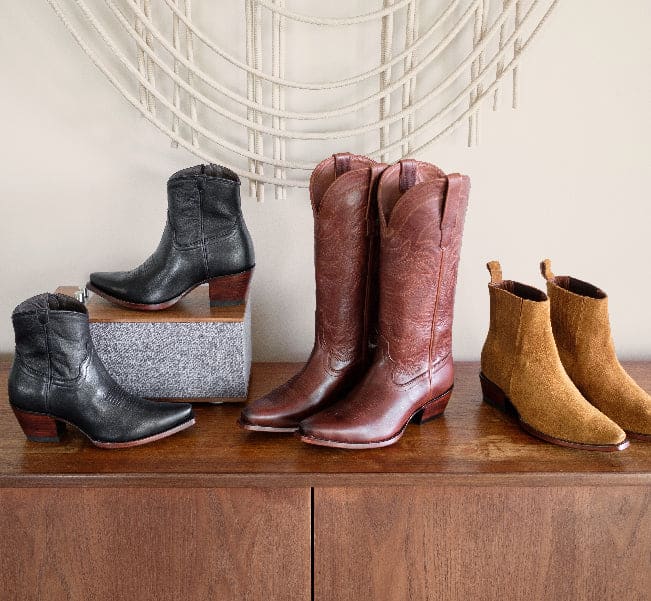 Whitney is photographed in this story wearing our newest women's boots. Shop The Annie, The Daisy, and The Piper.

When Grace Askew was in her 20’s she was exploring her identity vicariously through the “rough n tumble” lifestyle of her songwriting heroes - Blaze Foley, Guy Clark, Townes Van Zandt, and Tom Waits. That’s no easy group to keep pace with. Today, she’s a wife and mother and has almost 3 years of sobriety under her belt. The best...