We partnered with our friends at Modern Huntsman to capture real stories from real folks who were among the first to put Tecovas Ranch Wear to use. If you’re a hunter, you owe it to yourself to check Modern Huntsman. They’re redefining the narrative around what it means to be an advocate and enthusiast for the outdoors, shooting sports, wild places, and wild creatures. Below you’ll find an excerpt from a story about Carter Country Meats that we sponsored for Volume 6 of their printed publication. To read the full version along with more than 200 more pages of incredible photography and storytelling, please consider becoming a subscriber. On the face of it, fattening up cattle on grass in the Red Desert of southern Wyoming looks like squeezing nectar from dried wildflowers — possible, though unlikely. But if you take one square yard of the sagebrush steppe and really stop to look, you’ll find forage that has been supporting megafauna for millennia. Wildland shrubs create a canopy that fosters a mosaic of lichen. Each color marks the bedrock of varied geology on which this steppe has grown. The texture of this landscape cannot be described in words but instead a feeling. There is a starkness in this landscape, found more in what is not there than what is. If it weren’t for the intermittent buzz of dirt bikes, it would be hard to place this time in history.

Mark Carter grew up in the cowboy country of the Red Desert, a third-generation son of a rancher. If you ask Mark to tell you what’s hard about a cattleman’s life, he gives a youthful but weathered grimace. “We grew up gnarly, around livestock and motorcycles, and horses bucking us off. My dad wasn't like, ‘How are your feelings today?’ He just said, ‘This is what we're doing. The nights may be yours, but the days are mine.’ That's what he always told us.” The ranching life is woven into the Americana fabric that defines the West, but cowboys are a dying breed. The consolidation of the beef industry has cornered many producers into a system of feedlot operations driven by commodity rates that are at the whim of global markets. For the ranchers that make up the Ten Sleep, Wyoming-based Carter Country Meats, leaning into the headwind has become a stubborn mission, if not a way of life. Between the three Carter men — Richard, Mark’s father and his older brother, RC — cracking the commodity puzzle has lit a fire so bright that it’s hard not to be drawn in.To understand the origin of the cowboy, we first need to recognize the role of predators, like coyotes, wolves and cougars, that managed these grasslands before human intervention. Their presence pushed large ruminants across the landscape and created movement that the herd would not have made on their own. The Red Desert holds the largest unfenced area in the continental United States, providing open range for the greatest pronghorn migration south of the Canadian border. Mark sees the role he plays as an agent of environmental pressure on their cattle as part of the flow of the grassland ecosystem. “It's natural for animals to be on this land, it's healthy, and it's just as natural for us to be behind them, chasing them.” The drier the environment, the greater acreage a rancher needs to graze their livestock. The Carters both own and rent rangeland across Wyoming. On a Bureau of Land Management (BLM) lease that augments the family’s home ranch four hours to the north, Mark and RC push a herd of cow-calf pairs through Bull Springs, a perennial water source that bisects the Continental Divide. Though this natural spring sits at just under 7,000 feet above sea level, the water that percolates up from the bedrock will never flow off toward the Atlantic or the Pacific oceans. The Continental Divide Basin holds groundwater and melted snowpack in place, supporting forages like salt sage, Indian rice grass, squirrel tail and grey horsebrush for the Carter Country Meats Angus beef herd. In an agricultural climate where the pressure of continually ratcheting up productivity is commonplace, RC stands behind his need to adapt the herd size to the status of the forage from year to year. “The stocking densities here in this country are a lot lighter than up in Ten Sleep just because it's really sandy soil, so it doesn't hold as much moisture. But on this lease, which is about 340 square miles, I think there's probably 2,000 animals on it, depending on the year. In good years, when it rains, the forage would maintain even more than that.” Desertification of land is hard to reverse in high desert ecosystems. The Carter sons learned early on from their father that it’s the job of the rancher to be a steward of rangeland balance. In the vastness of the Red Desert, BLM land is surveyed using lines on a map, not necessarily accounting for natural features that influence the viability of individual pastures. But the value of securing a lease and becoming a student of the terrain is not only smart business for the rancher, but an act of conservation in the greater picture of regenerative outcomes.

Understanding what areas are most sensitive to erosion and where animals can access water requires an intimate sensitivity of the rancher with his rangeland. Mark points to several areas across the horizon. “All these wells are solar wells. My dad put these in when he first got this lease, so he has water all over.” Richard’s commitment to developing the desert pasture took an investment in time that unfolds much more slowly than grazing systems in regions with more precipitation. RC points out that many BLM programs are not nuanced enough to account for individual microclimates, but it all comes down to relationships.

“You got to have the right BLM agent who is eager enough to look outside the box a little bit. We are working on some stuff with our range gal right now to go in and redo all the fences based off of topography. We look where the water's at, the soil quality, and where we’ve got a bunch of canyons, rather than build a fence where it doesn’t make sense.” Weathering the sand, rock and desert scrub on horseback is a longstanding tradition of the cowboy life, but Richard Carter realized decades ago that he could cover far more ground on a dirt bike. Mark remembers how his father put innovation in front of folk rituals to get the job done. “We grew up on horses. It was the standard issue Western way. Dad, he's still all about the horses, but just out of functionality, for being short-handed in big country with lots of cattle, that's when we added motorbikes into the mix. I think the first time I ever chased cows on a motorcycle I was in the fifth grade. You can put in 100 miles a day on a bike. You just can’t do that on a horse.” Ripping through the desert on a motorbike may seem at odds with cowboy culture, but...

(Continued in Volume 6 of Modern Huntsman. For information on how to get a copy or subscribe click here.) 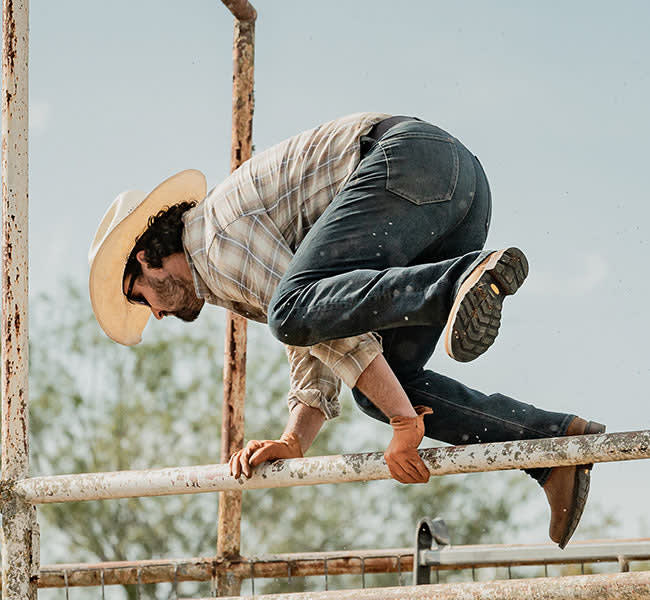 It's about time Tecovas kicked up some dust. Shop the Ranch Wear collection to see all items featured in this story and get to work.

It must have been hard, if not impossible, for Josh Eilers to imagine that he would become a cattle rancher. After all, he’s just spent the better part of his adult life either in combat or training for combat with the elite Army Rangers. After an injury in battle, for which he received a Purple Heart, he decided it was...

The vastness of West Texas inspires us at Tecovas. In fact, our name comes from a geological formation in Palo Duro Canyon. We look to it for inspiration and continue to find it an endless source of exactly that. Our friends Richard and Cory ventured west recently and we asked them to share their thoughts on this amazing part of...

Todd Sanders is a neon pop artist who builds vintage-style neon signs out of his shop in Austin, Roadhouse Relics. We had the opportunity to interview Todd (transcribed below) and shoot some photos for Tecovas Ranch Wear as he did his thing. Todd’s a great example of what it means to Walk Taller, to not give up and to listen...