The post that follows is the third contribution from our friend, Ivan McClellan. If you missed the first couple, you can check them out here and here. Ivan is a storyteller with a camera and we're proud to share his work as he captures black cowboys and cowgirls who each add to the mystique of the west. We hope you enjoy this contribution and invite you to follow him to see all that he's up to. Walk Taller, y’all. Tiera has big country star energy. When I met her at her studio in Nashville, I was blown back as if Dolly Parton herself had just walked in the room. I saw similar reactions from people as we walked around Nashville. Everybody stopped to gawk at her in the Graduate Hotel lobby, some without even knowing who she was. One young woman boldly walked up and asked for a selfie "OMG, you must be somebody famous, I can just tell!" But her allure goes beyond the energy, fringe, and big hair. She has the musical chops to back it up, spending hours a day in the studio writing, playing guitar, and mastering her craft. "I love to sit in the room with my co-writers and talk about life - what I'm going through, what they're going through. One of my favorite things to do is throw around titles and imagine what that could be about," she says. She recently worked with fellow Nashville rising star Breland on an absolute earworm, "Miles" that already has nearly 1 million streams on Spotify. Her most popular song, "Found it in You" is inspired by her relationship with her fiance Kamren. The hard work and intimacy that goes into her music have gained the attention of swarming record labels and CMT, who named her one of their 2020 rising stars. But with her success, Tiera has remained humble, never forgetting her roots in Gardendale, Alabama. She was a singer from the very beginning, and country poured out of her. "When I started writing my own music, it naturally came out country. I feel like country music at its core is all about storytelling. I was writing about what I was going through at the time. I loved how country music is centered around the lyrics and getting a story across, so I naturally gravitated towards that whenever it came to writing my own music." Her parents encouraged her to pursue her dreams every step of the way, and in 2017 when it was time to move to Nashville and start her music career, the whole family came with her. Once in Nashville, she struggled to find her place but quickly found a supportive community there. "I was blessed to have so many amazing people in the industry champion me and get behind me when I was first starting. When we moved here, we were all at the very bottom at the beginning and we all had someone that helped us out. I think it's a really beautiful thing how people get together and rally behind each other and support each other." With the help of good people around her and unwavering tenacity, Tiera is set to take the Nashville music industry by storm. Check out the Spotify playlist that Tiera put together for us featuring some of her favorite tunes, both new and old! 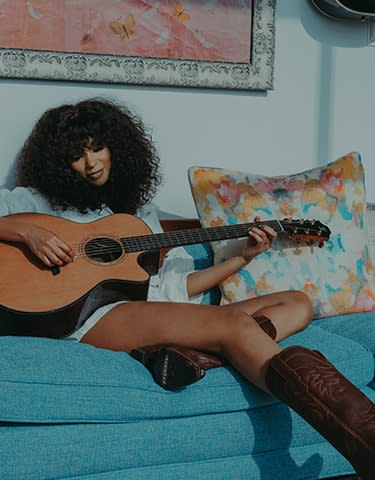 Tiera is shown wearing The Annie, our tall women's cowgirl boot. The voice may be hard to copy, but the look isn't!

The post that follows is the second contribution from our friend Ivan McClellan. If you missed the first one, you can check it out here. Ivan is a photographer and storyteller who’s focused on sharing stories, characters, and experiences of black cowboys and cowgirls. You can (and we hope you will) follow him here. We’re proud to partner with Ivan...

When Grace Askew was in her 20’s she was exploring her identity vicariously through the “rough n tumble” lifestyle of her songwriting heroes - Blaze Foley, Guy Clark, Townes Van Zandt, and Tom Waits. That’s no easy group to keep pace with. Today, she’s a wife and mother and has almost 3 years of sobriety under her belt. The best...

We jumped at the opportunity to shoot Whitney Rose in our new women’s boots in and around a couple of Austin’s most iconic music venues. There may have been some cold beers at the end of the day and a chance to catch up on what she’s been up to during this crazy time. Whitney Rose On February 7th, Rolling...